Del City, OK
Member since May 16, 2014
(405) 458-2577
Please only contact the seller if you are interested in buying or bartering for this item. Spam and fraud will not be tolerated.
View seller's other items 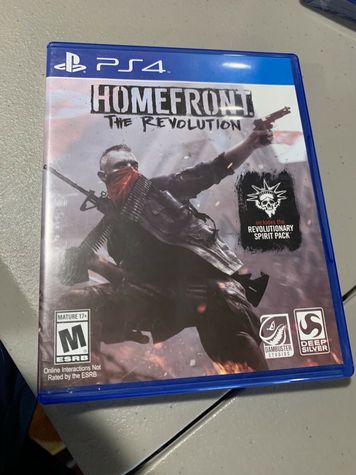 About this product
Product Information
Players engage in guerilla warfare as they shoot their way through an open-world version of Philadelphia in Homefront: The Revolution. As with the original Homefront, the game takes place in an alternate timeline where a reunited Korea has invaded and occupied large portions of the United States. The first-person action puts gamers in the role of Ethan Brady as he helps lead a resistance movement by recruiting new fighters, improvising weapons, and using ambushes, sabotage, and deception to overcome the Korean People's Army extreme technological and military advantage.

Homefront: The Revolution also includes a separate co-op multiplayer campaign in which four gamers can team up and form their own resistance cell. This Resistance mode functions somewhat like a traditional survival mode, with players battling waves of oncoming foes, but it also offers narrative-driven missions and includes unique characters, classes, perks, and progression.

This bonus edition includes the full game as well as the Revolutionary Spirit pack, which offers the Red Skull motorcycle skin and the golden pistol skin, as well as early unlocks for remote explosives, sniper scopes, and the Marksman Rifle.