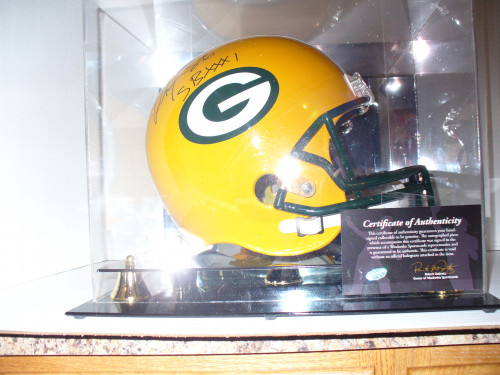 This autographed NFL helmet is signed by one of the Green Bay Packer's best wide receivers. It come with it's own display case with a Certificate of Authorization of his signature.Antonio Freeman played college football at Virginia Tech, where he caught 93 passes for 1,534 yards and 16 touchdowns in three seasons. He also returned 63 punts for 651 yards and another touchdown, and
rushed for 37 yards. His accomplishments earned him enshrinement in the Virginia Tech Sports Hall of Fame. Antonio Freeman was drafted by the Green Bay Packers in the 1995 NFL Draft. In his rookie season, he returned a punt 76 yds for a touchdown during a playoff win over Atlanta. He went on to lead the Packers in receiving in four seasons from 1996–1999, and led the NFL in receiving
in 1998. In 1998, Freeman had his best NFL season, catching 84 passes for a league leading 1,424 receiving yards and earning the right to his only Pro Bowl appearance. In his ten NFL seasons, Freeman caught 477 passes for 7,251 yards, gained 1,007 yards returning kickoffs and punts, and scored 61 touchdowns. He played in the Pro Bowl in 1999. His teams made the playoffs in
seven of his NFL seasons. He appeared in four NFC Championship Games and two Super Bowls. He ranks sixth all-time on the Green Bay Packers receivers list with 6,651 yards on 431 catches. Freeman had three 1,000 yard receiving seasons in his career, 1997-1999. Nicknamed "Free", in 2006 Freeman won a Pop Warner Award for his work with youth. On June 16, 2007, Freeman signed with the Packers to retire with the team. I'm selling this collector's piece from my private collection for $200.00 or you can make me an offer. My email address is southpaw1947 at gmail.com. Please, only serious inquiry's need write. I accept PayPal or a Postal money order for payment. Please add $10.00 for shipping.