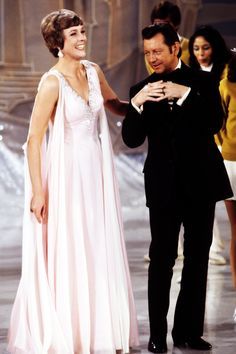 This is the high quality 24-disc set of The Julie Andrews Hour. It was personally recorded by me on videotape back in 1972 when I was a studio engineer in the south. I missed the 12/13/72 show due to inclement weather. Other Buyers purchased the set from me and reformatted and compressed the shows into a more inferior 5, 7, 10, 11-disc sets. This is why other sets are also missing the 12/13 show! Below at the bottom are more Julie Andrews shows & appearances. **These are from my private collection and ship in white sleeves, no plastic case, no art.
***International buyers require additional postage/shipping. Inquire beforehand.
September 13th, 1972
The premiere show was an Emmy-award winning one-woman showcase for Julie, who performs scenes and songs from her various stage and film roles (including My Fair Lady, Mary Poppins, Star!, The Sound of Music, and Camelot.) Among other songs, Julie performs "Wouldn't It Be Loverly?", "Do Re Mi," "Burlington Bertie from Bow," "If Ever I Would Leave You," and a â€œBoyfriend Medleyâ€.

September 20th, 1972
Guests: Carl Reiner, Mama Cass Elliott.
Sketches: A spoof of the film All About Eve, a recitation of movie cliches, and a salute to those born under the sign of Aquarius.
Songs: "And This is My Beloved," "You're Going to Hear From Me" (Julie), a medley with Mama Cass, and "It's Today" (Ensemble).

September 27th, 1972
Guests: Jack Cassidy, Ken Berry.
Theme: Salute to the past of Broadway and Hollywood.
Sketches: Ken and Julie spoof Astaire and Rogers; Jack as Flo Ziegfield escorting Julie to Delmonico's; Rich Little mimes Bogart.
Songs: "I Have Dreamed" and Scottish medley (Julie), "Lullaby of Broadway," "I Know Darn Well I Can Do Without You" (Julie, Jack), Love song medley (Ensemble).

October 18th, 1972
Guest: Steve Lawrence.
Theme: Salutes to several celebrities, including Laurel and Hardy, Jeannette MacDonald and Nelson Eddy, and the Marx Brothers.
Sketch: Steve as a brash Yank flier and Julie as a music hall girl in a Darling Lili-styled spy caper.
Songs: â€œUntil it's Time For You to Go," "Men Like You" (Julie), "Applause," "We'll Meet Again," Oscar medley (Julie, Steve).

January 10th, 1973
Guest: Keith Michell
Theme: Keith joins Julie in classic scenes from drama and literature. These include Shakespeare's The Taming of the Shrew, Noel Coward's Cavalcade, Oscar Wilde's The Importance of Being Earnest, and A. A. Milne's The King's Breakfast.
Songs: "On a Clear Day" (Julie), "What Will You Leave?" (Keith), "Two on the Aisle," "Dancing in the Dark," "Dancing on the Ceiling," "Mack the Knife" (Julie, Keith).

January 20th, 1973
Guests: Jim Nabors, Eydie Gorme, Maria von Trapp (who Julie portrayed in The Sound of Music). The opening scenes from The Sound of Music are shown.
Sketches: A spoof of Gone With the Wind.
Songs: "Do Re Mi," "The Sound of Music," "Whistle a Happy Tune" (Julie) "Why Was I Born" (Eydie), "Edelweiss" (Julie, Maria), "Make Believe" (Jim), "I Am Woman," Rain medley (Julie, Eydie).

January 27th, 1973
Guests: Peggy Lee, Robert Goulet.
Theme: Salutes to Broadway producer David Merrick and to Sagittarians.
Songs: "I'm Gonna Wash That Man Right Out of My Hair," "Summertime," "Let Me Entertain You," "Love Makes the World Go Round" (Julie), "Someone Who Cares," "Who Will Buy?" (Peggy), "Fanny" (Robert), "The Candy Man," "Before the Parade Passes By" (Julie, Peggy, Robert), "Take Me Along," "Together" (Ensemble).

February 3rd, 1973
Guests: Sid Caesar, John Davidson.
Sketches: a Godfather spoof; Sid in his German professor character.
Songs: "On the Sunny Side of the Street," "Baubles Bangles and Beads," "Get Happy" (Julie).

Half an hour of outtakes from the entire season that have never been broadcast (except for a few minutes shown in the final episode with Henry Mancini). These are guaranteed to have you howling with laughter. Watch as Julie and her co-stars repeatedly fluff their lines and fail to refrain from losing all composure in front of the camera and the live television audience! Julie was quoted at the time the show started taping as saying â€œFunny, or embarrassing things really do happen to me...and now Iâ€™ll try to show that side of me.â€ Nothing demonstrates this fact more beautifully than these delightful outtakes. At one point, while announcing the change in time and show broadcast evening for the following week she forgets her lines and, knowing she will re-shoot the segment, berates the television audience at home for the showâ€™s poor showing in the TV ratings, but does it with a charming air of graceful resignation that demonstrates that she knows all too well what fate lies ahead for the show...

This incredible dvd set is a rare opportunity to step back in time to when life was less complicated and entertainment was good, clean, honest fun! There will never be another TV show like The Julie Andrews Hour!