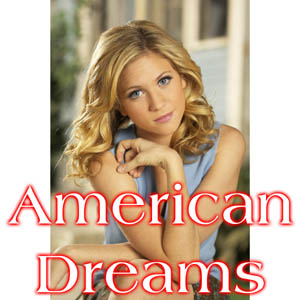 ALL EPISODES HAVE MENUS AND ARE COMMERCIAL FREE.

NO OTHER SELLER HAS THIS SET !!!

THIS SERIES HAS NEVER BEEN RELEASED ON RETAIL DVD.THIS SET HAS BEEN RECORDED AND COMPILED FROM TV BROADCASTS***
IN EXCELLENT QUALITY.

This evocative drama, which won two Emmy Awards, is set against the memorable music, the cultural clashes, and the Vietnam war during the 1960s. The third-year drama depicts the American landscape -- as seen through the youthful Pryor family of Philadelphia as they brace for the cultural turbulence ahead that still resonates in this contemporary era.

Seventeen-year-old Meg Pryor (Brittany Snow, â€œGuiding Lightâ€) is shedding her â€œgood girlâ€ image as she and her outspoken best friend Roxanne (Vanessa Lengies, â€œPopular Mechanics for Kidsâ€) continue to pursue their dreams of making a difference as they struggle through the transition from teenager to adult. While they continue to dance on Dick Clarkâ€™s locally produced â€œAmerican Bandstand,â€ they find -- as seniors at East Catholic High School -- that the world around them is growing ever closer with issues of the war, racism, feminism, and even teen marriage and pregnancy.

NO OTHER SELLER HAS THIS SET !!!

This episodes are in Excellent digital quality in Widescreen. These are called Ruff Cuts because these are in production, pre finalized shows..the quality is truly broadcast quality..If your a Fan on American Dreams, this is the PERFECT find to add to your collection..

Due to the ease of copying dvds,all sales are final..I will replace any defective dvd..