Navarre, OH
Member since October 4, 2010
Please only contact the seller if you are interested in buying or bartering for this item. Spam and fraud will not be tolerated.
View seller's other items 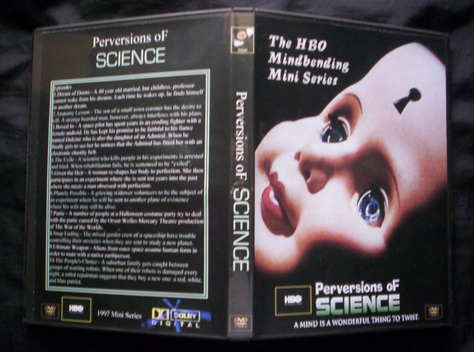 Perversions of Science is a science fiction / horror television series that ran on the cable channel HBO for one season in 1997.

It is a spinoff of popular horror series Tales from the Crypt also shown on HBO, and its episodes are based on the Weird Science comic book series.

1. Dream of Doom - A 40 year old married, but childless, professor cannot wake from his dreams. Each time he wakes up, he finds himself in another dream.
2. Anatomy Lesson - The son of a small town coroner has the desire to kill. A strange bearded man, however, always interferes with his plans.
3. Boxed In - A space pilot has spent years in an eroding fighter with a female android . He has kept his promise to be faithful to his fiance named Dulcine who is also the daughter of an Admiral. When he finally gets to see her he notices that the Admiral has fitted her with an electronic chastity belt .
4. The Exile - A scientist who kills people in his experiments is arrested and tried. When rehabilitation fails, he is sentenced to be "exiled".
5. Given the Heir - A woman re-shapes her body to perfection . She then participates in an experiment where she is sent ten years into the past where she meets a man obsessed with perfection.
6. Planely Possible - A grieving widower volunteers to be the subject of an experiment where he will be sent to another plane of existence where his wife may still be alive.
7. Panic - A number of people at a Halloween costume party try to deal with the panic caused by the Orson Welles Mercury Theatre production of The War of the Worlds .
8. Snap Ending - The mixed gender crew of a spaceship have trouble controlling their anxieties when they are sent to study a new planet.
9. Ultimate Weapon - Aliens from outer space assume human form in order to mate with a native earthperson.
10. The People's Choice - A suburban family gets caught between groups of warring robots. When one of their robots is damaged every night, a robot repairman suggests that they buy a new one: a red, white, and blue patriot .
There has never been a studio release of this HBO series and it does contain some commercials as originally aired.

Unfortunately Buy sell community does not offer an automatic check out option. If you are interested in purchasing this item, please send me an email and you will be given instructions to automatically check out using Credit Cards, Debit cards and Amazon payments.

THIS RARE TITLE IS TRANSFERRED TO A NEW HIGH QUALITY DVD-R DISC, In NTSC format, region free, and will play in any DVD player. This DVD comes with case and artwork as shown in photo. Due to the ability to duplicate
this product, ALL SALES ARE FINAL. However, in the unlikely event buyer receives a defective disc, disc will be replaced after the defective disc has been returned.

All items ship within 24 hours after payment has been received, via first class mail with delivery confirmation (US Only).