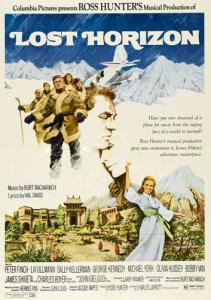 This retelling of the classic tale of James Hilton's Utopian lost world plays
out uneasily amid musical production numbers and Bacharach pop music.
While escaping war-torn China, a group of Europeans crash in the
Himalayas, where they are rescued and taken to the mysterious Valley of
the Blue Moon, Shangri-La. Hidden from the rest of the world, Shangri-La
is a haven of peace and tranquility for world-weary diplomat Richard
Conway. His ambitious brother, George, sees it as a prison from which he
must escape, even if it means risking his life and bringing destruction to
the ancient culture of Shangri-La.

Although there's no official DVD release of Lost Horizon, this high quality DVD-R is sourced from a commercial Pioneer Laserdisc that includes high quality remastered sound and video of the film's edited version. Included as well are restored segments that had since only been shown in the film's original theater release. While these inserted lost segments are easily recognized by reduced quality from the film's main body, they are a very enjoyable part of the movie's otherwise unseen legacy.