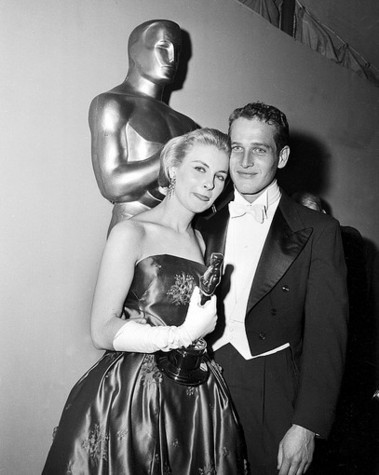 ACADEMY AWARDS 1 DVD 1958 30TH ACADEMY AWARDS sharp crisp blk and white - 41 minutes, 1ST LIVE BROADCAST - NBC BROADCAST -- BASIC FACTS - 1957's best films were honored at the 30th Academy Awards, held on 26 March 1958. - The Oscar for Writing Based on Material From Another Medium was awarded to Pierre Boulle for The Bridge on the River Kwai, despite the fact that he did not know English. The actual writers, Carl Foreman and Michael Wilson were blacklisted at the time and did not receive screen credit for their work. Foreman and Wilson have since been acknowledged by the Academy for their contributions. - Joanne Woodward's win for Best Actress for her triple role as Eve White, Eve Black and Jane in The Three Faces of Eve marked the film as the last film to win Best Actress without being nominated for other awards. This was broken 31 years later when Jodie Foster won Best Actress for her role in The Accused, the film's only nomination. - Peyton Place tied the record for the most nominations without a single win (9) with The Little Foxes. It would not be broken until 1977 when The Turning Point received 11 nominations without a win, which has not been broken since, though The Color Purple subsequently tied the record. Peyton Place also set the record for most unsuccessful acting nominations with five; this record has been tied once, by Tom Jones at the 36th Academy Awards. - It was the first time the ceremonies were broadcast live.This was the first time all five Best Picture nominations were nominated for Best Director as well.