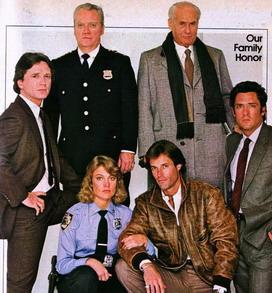 THIS IS A 2 DVD SET. 6 RANDOM EPISODE'S OF THIS FANTASTIC
SHOW.

DVDS HAVE MENUS , BUT NO EPISODE TITLES

Launched as a two-hour TV-movie, Our Family Honor was about two
New York City families who had known each other since their childhoods
and who were involved in competing "family businesses"

The McKay family mostly worked for the New York City Police Department, where Patrick ( Kenneth McMillan) was Commissioner, while the Danzigs were deeply involved in organized crime, with patriarch Vincent ( Eli Wallach)
filling the role of "godfather".

She was romantically involved with Vincent's other son, Jerry ( Michael Woods), who wanted out of his father's business and used the name "Jerry Cole" in order to minimize any connection with his father's family.

Another story line involved Vincent's murder of his wife's lover, carried out by Augie; when Frank came to arrest Augie for this crime, Augie died in the ensuing fight. The effect of Augie's death remains unknown.

Do to the ease of copying DVDs all sales are final. I will
replace any defective DVD