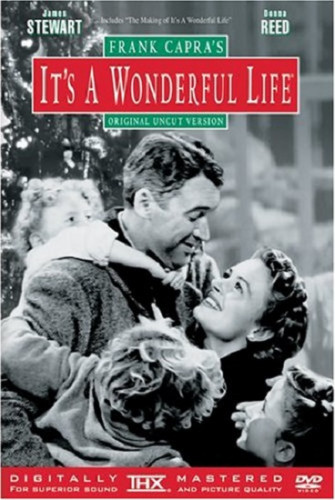 Synopsis:
This is director Frank Capra's classic bittersweet comedy/drama about George Bailey (James Stewart), the eternally-in-debt guiding force of a bank in the typical American small town of Bedford Falls. As the film opens, it's Christmas Eve, 1946, and George, who has long considered himself a failure, faces financial ruin and arrest and is seriously contemplating suicide. High above Bedford Falls, two celestial voices discuss Bailey's dilemma and decide to send down eternally bumbling angel Clarence Oddbody (Henry Travers), who after 200 years has yet to earn his wings, to help George out. But first, Clarence is given a crash course on George's life, and the multitude of selfless acts he has performed: rescuing his younger brother from drowning, losing the hearing in his left ear in the process; enduring a beating, rather than allow a grieving druggist (H.B. Warner) to deliver poison by mistake to an ailing child; foregoing college and a long-planned trip to Europe to keep the Bailey Building and Loan from letting its Depression-era customers down; and, most important, preventing town despot Potter (Lionel Barrymore) from taking over Bedford Mills and reducing its inhabitants to penury. Along the way, George has married his childhood sweetheart Mary (Donna Reed), who has stuck by him through thick and thin. But even the love of Mary and his children are insufficient when George, faced with an $8000 shortage in his books, becomes a likely candidate for prison thanks to the vengeful Potter. Bitterly, George declares that he wishes that he had never been born, and Clarence, hoping to teach George a lesson, shows him how different life would have been had he in fact never been born. After a nightmarish odyssey through a George Bailey-less Bedford Falls (now a glorified slum called Potterville), wherein none of his friends or family recognize him, George is made to realize how many lives he has touched, and helped, through his existence; and, just as Clarence had planned, George awakens to the fact that, despite all its deprivations, he has truly had a wonderful life. Capra's first production through his newly-formed Liberty Films, It's a Wonderful Life lost money in its original run, when it was perceived as a fairly downbeat view of small-town life. Only after it lapsed into the public domain in 1973 and became a Christmastime TV perennial did it don the mantle of a holiday classic.