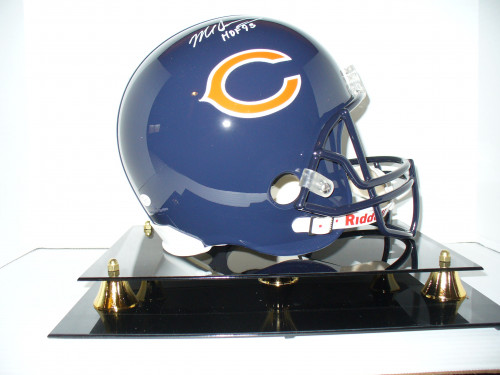 This autographed NFL helmet is signed by one of the Green Bay Packer's best wide receivers. It come with it's own display case with a Certificate of Authorization
of his signature. At 6 ft, 230 lb, Singletary became a starting linebacker in the Chicago Bears defense in the seventh game of his rookie season (1981).
In a game against the Kansas City Chiefs, his third as a starter, Singletary gave a remarkable defensive performance, recording 10 tackles and forcing a
fumble. He was a nearly unanimous all-rookie selection. Singletary started 172 games for the Bears during his 12-year career, the second most in club
history. An intense player, he finished as the Bears' first or second leading tackler each of his last 11 seasons. He amassed an impressive 1,488 career
tackles, 885 of which were solo efforts. He missed playing just two games, both in 1986. He made 7 interceptions and 12 fumble recoveries.
In a game against the Denver Broncos in 1990 he had a personal-best performance when he recorded 10 solo tackles and 10 assists. Selected to play
in a team record 10 Pro Bowls, Singletary was All-Pro eight times, and All-NFC every year from 1983 to 1991. He earned the nickname Samurai Mike
during his professional career in recognition of the intimidating focus and intensity he displayed on the field. He was also known as the Minister of Defense,
as he is also an ordained minister. (For the same reason, the nickname would later be given to another NFL defense player, Reggie White.) He led the Bears
to a 15-1 season in 1985. The "46" defense invented by Buddy Ryan allowed Singletary to be unblocked on virtually every play. That season, he recorded 109
solo tackles (52 assists), 3 sacks, 1 interception, 3 fumble recoveries, 1 forced fumble, and 10 defended passes. He won the NFL Defensive Player of the Year,
and led a defense that was ranked 1st overall (1st against the rush; 3rd against the pass). Singletary was named NFL Defensive Player of the Year by the
Associated Press in 1985 and 1988. He retired from the Bears in 1992 and went on to coach the Baltimore Ravens, the San Francisco 49ers, the Minnesota
Vikings, and the L.A. Rams. I'm selling this collector's piece from my private collection for $200.00 or you can make me an offer. Please, only serious inquiry's need write. I accept PayPal or a Postal money order for payment. Please add $10.00 for shipping.