How I Quit Smoking on my own after 23 years 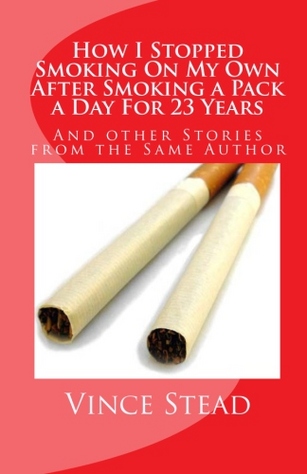 You can get these fun cool books to read for only $2.99 at Amazon and Barnes & Noble.

"I stayed in my garage and lit up a cigarette, and then I smoked it. Then I lit up another one and smoked it, and I don't think I ever smoked one right after the other, unless I was drinking."

"I lit up a 3rd cigarette, and I could not almost smoke that one, and then I started inhaling the cigarette smoke into my nose, and it was burning me. My eyes were burning, and I started thinking, I hate these cigarettes, and then I lit up another one, and smoked it!"

"I smoked it, until I could hardly smoke it, and then I snorted it up my nostrils, until it was burning so bad, my body hated it! I have not smoked a cigarette in over 10 years now, and never even had a desire the next morning, learn how I taught myself not to have a craving inside, and other stories from the same author that will blow your mind maybe."

How to Get Even and Revenge With Pranks on Anyone!

In this book, you will find many ways to get even or revenge on someone, and the best revenge, is when they do not know it came from you!

Try not to break any laws, and the best revenge is always forgiveness, but if you don't have that in your heart, and you want and eye for any eye, then read on!


Sammy is a Mastiff dog that breaks out of his kennel to explore his neighborhood and the world! He meets other animals in his neighborhood, and then he gets lost while discovering his own town! He is lost and meets new friends along the way who help him and feed him.

Meanwhile, back at home, Jazmyn is worried sick she might never see Sammy again, since he broke out of his kennel! Sammy meets a boy named Stevie that lives over a bakery his dad owns. Sammy meets a new dog named Ginger, that helps him on his journey to get back home. They are chased by security guards, and almost run over by a tractor, and a death defying bridge crossing, and fast moving cars everywhere! You will love Sammy, he is the nicest, friendliest "gentle giant" dog there is!