NO RETREAT NO SURRENDER U.S. VERSION 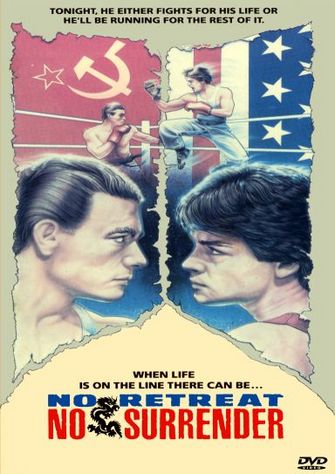 This the U.S. version of the classic Old School martial arts flick which Jean Claude Van Damme debuted in. This version is the theatrical version that played in the U.S. which have the original soundtrack and a couple of scenes that are not seen in the International version. The overseas version do not have original soundtrack and the movie start a bit little different. It is claimed that the int'l version have a little bit more violence in it, but I do see when it comes to that. Both hero and villian go all out in this martial art classic. If you want to see this movie the way it was presented in the theaters here in the U.S. then this is the version you want! Also, this print is VERY GOOD, the best one can get for this movie! The dvd is encoded NTSC REGION 0(playable on dvd players worldwide). The audio and video quality is VERY GOOD!(rate 9 out of a possible 10). INTERNATIONAL BUYERS DO NOT PAY UNTIL ADJUSTED INVOICE IS SENT REFLECTING PROPER SHIPPING AND HANDLING FEES. Thank you!