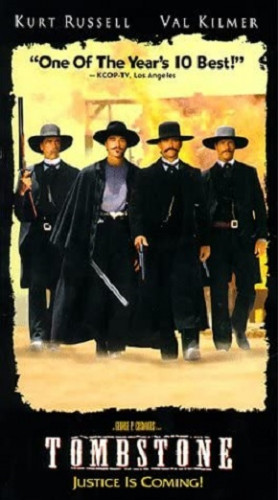 Synopsis:
A high-energy action adventure based on legend rather than historical fact finds Wyatt Earp (Kurt Russell) desiring to retire from law enforcement. With brothers Virgil (Sam Elliot) and Morgan (Bill Paxton), he arrives in Tombstone, Arizona intending to build his fortune. He discovers that long-time friend Doc Holliday (Val Kilmer) is there and that the town is run by a group of brutal outlaws called the Cowboys. Earp, frustrated with his laudanum-addicted wife, begins a romance with traveling stage actress Josephine Marcus (Dana Delany). Meanwhile, the Cowboys terrorize the citizens of Tombstone unchecked. When the town marshal is killed by a Cowboy, Earp steps in to prevent a lynching by an angry mob. He also refuses to hand the killer over to his fellows, beginning the enmity between the Cowboys and the Earp brothers. Virgil, overcome with guilt at doing nothing to help the Tombstone citizens, accepts the position of town marshal. With Wyatt and Morgan as his deputies, and the help of Doc, Virgil attempts to arrest several Cowboys, resulting in the famous OK Corral shoot-out. The Cowboys take revenge by ambushing two of the brothers and injuring Virgil and killing Morgan. The Earps leave town, apparently cowed. Wyatt returns, wearing the badge of a U.S. marshal, vowing to destroy every last Cowboy. He hunts them mercilessly, until the leader, Johnny Ringo (Michael Biehn) challenges Wyatt to a duel. While not regarded as an artistic masterpiece, "Tombstone" is considered the best of director George P. Cosmatos's prolific films. The all-star cast (including Thomas Haden Church and Billy Bob Thornton in small roles) delivers solid performances. Both William A. Fraker's cinematography and Bruce Broughton's stirring musical score are expertly designed for dramatic effect. Blood is shown liberally in several key scenes, but seems intended to show that there is nothing glorious in Wyatt Earp's actions, only necessity. He and his deputies take on the symbolism of the horsemen of the apocalypse-dispensing judgement, and the Biblical references form a symmetry at the beginning and end of the film.