CURSE OF THE FLY 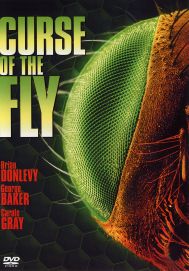 The Curse Of The Fly is the third installment of the science fiction series that began with the classic The Fly. The filmï¿½s plot again revolves around the Delambre family, although this time it is the original scientistï¿½s son, Henri Delambre (Brian Donlevy), who becomes obsessed with transporter experiments to the dismay of his two sons, who want to live normal lives and forget about their grandfatherï¿½s invention. Henriï¿½s oldest son, Martin (George Baker), marries a young woman ï¿½ who just escaped from a mental hospital ï¿½ against Henriï¿½s wishes. Henri knows that outside interests will detract from their scientific research. After Martinï¿½s new wife discovers a closet filled with deranged humans left over from failed teleportation experiments, the police are called and Henri attempts to flee using the infamous transporter. Unfortunately for the mad scientist, the transporter still doesnï¿½t have the "bugs" worked out. This dvd is encoded NTSC REGION 0(playable on U.S. and Canada dvd players). The audio and video is EXCELLENT(rates 10 out of 10). The movie is presented in WIDESCREEN FORMAT!To make a purchase or for more information about us, please go to our site at: