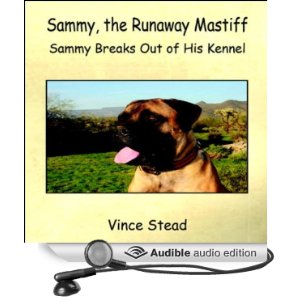 Sammy is a Mastiff dog that breaks out of his kennel to explore his neighborhood and the world! He meets other animals in his neighborhood, and then he gets lost while discovering his own town! He is lost and meets new friends along the way who help him and feed him.

Meanwhile, back at home, Jazmyn is worried sick she might never see Sammy again, since he broke out of his kennel! Sammy meets a boy named Stevie that lives over a bakery his dad owns. Sammy meets a new dog named Ginger, that helps him on his journey to get back home. They are chased by security guards, and almost run over by a tractor, and a death defying bridge crossing, and fast moving cars everywhere! You will love Sammy, he is the nicest, friendliest "gentle giant" dog there is!