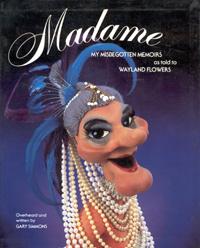 ALL MY DVDS ARE REGION FREE, WILL PLAY WORLD WIDE

18 EPISODES IN COLOR, THATâ€™S ALL THE EPISODES THAT EXISTâ€™S OF THIS EXCELLENT COMEDY.

THIS SHOW HAS NEVER BEEN RELEASED ON RETAIL DVD. THIS SET HAS BEEN RECORDED FROM TV BROADCASTS***

Madame's Place aired during the 1982-1983 season in first run syndication.

Puppeteer Wayland Flowers had created the character of Madame, a craggy, crackling, slightly off-color old hussy, and toured with her for several years on the cabaret and guest circuit. She was supposed to be an old show-business trouper who had started in vaudeville and then made more than 30 movies, and who still acted very much the glamorous star despite her appearance.

In 1982 the aging queen showed up surrounded by human supporting actors, in this five-night-a-week syndicated comedy, playing the host of a talk show originating from her palatial mansion in Hollywood. There was constant bickering with her neighbors, her network, and her staff, as well as an abundance of lecherous jokes and put-downs of anyone who wandered by.

Despite a large number of bizarre characters passing through ( many of them parodies on show business types), some guest celebrities such as William Shatner and Debbie Reynolds, and very clever puppet work by Flowers ( who manipulated his creation with rods rather than strings), Madame's Place folded after a short time.

Do to the ease of copying DVDs all sales are final. I will replace any defective DVD