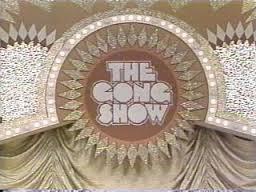 This newly created Gong Show DVD set contains 92 Episodes with over 550 acts !!!
The Biggest & the Most Complete Episode Collection that exists today of the Gong Show Game show.
This set debuts 24 newly discovered Episodes just found from a private collection on Beta Tapes.
Those episodes have never before been on the Internet. Professionally transferred to DVD for this set only
Additionally the Gong Show Movie and some "more stuff" extras also included.
We have the outrageous 'POPSICLE TWINS' act and the full episode with 'LOLLIPOP JOHNSON', Young president Barry Obama in the "Magicians Three' act, Steve Martins performance as well as Steve Martin the Judge. Also some more stuff like the 'ALL-STAR Special' Broadcast, The Phyillis Diller Impersonator act and the 'Mama's Family' episode with Carol Burnette on the Gong Show.

BEWARE OF and 'GANG GONG' THE OLD 70 Episode set which sells as an 8, 9, or 10 disk set.
Its only 63 episodes with 7 duplicates and No Episode Selection Menus and DOES NOT CONTAIN THE NEWLY DISCOVERED 24 EPISODES!!!

DVDS shipped in white sleeves, no returns, but will replace any defective Disc.