Keystone, IA
Member since November 8, 2008
Please only contact the seller if you are interested in buying or bartering for this item. Spam and fraud will not be tolerated. 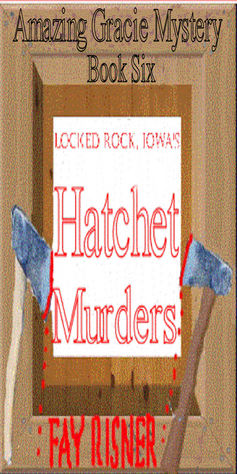 New book by Iowa author Fay Risner. Signed by her to the person of your choice. book 8.50 x 5.50
Locked Rock, Iowa again with Gracie Evans and her friends antics. Enjoy this story about the Moser Mansion Rest Home residents attempt to make conditions better for women in 1905. Book 6 in the Amazing Gracie Mystery Series

What do you know! Gracie Evans, resident of Moser Mansion, has turned into a women's activist. Locked Rock's newspaper is full of news from back east. Suffragettes are burning their corsets to draw attention to the fact that they want the same right to vote as men. Women are trying to bring on probation with the help of Carrie A. Nation, Temperance Movement leader, by smashing saloons with hatchets.

Gracie enlists the women's bible study group to organize a Temperance march. She means well, but before she knows it, she's turned all the men in town against the women. The march gets Gracie and two others arrested. Her community service punishment as the town's telephone operator puts her in the hot seat right where the men in town want her so they can threaten her.

However, someone does more than threaten the town's Temperance Leader Ida Frank. A killer hacks Ida and her family to death with the Moser Mansion hatchet. Rafe Johnson's blood hounds trail a scent to Moser Mansion. All of Locked Rock's citizens are on edge and looking for someone to blame for the murders. Gracie Evans is the men's prime suspect.
Postage for this new book is included in the price.