Crescent City, CA
Member since August 22, 2016
Please only contact the seller if you are interested in buying or bartering for this item. Spam and fraud will not be tolerated.
View seller's other items 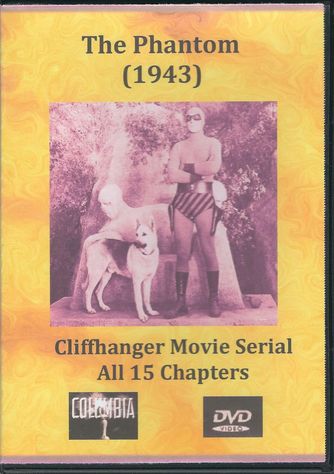 The Phantom is a 1943 Columbia Pictures 15 chapter black-and-white cliffhanger serial, produced by Rudolph C. Flothow, directed B. Reeves Eason, and starring Tom Tyler in the title role. It is based on Lee Falk's comic strip The Phantom, first syndicated to newspapers in 1936 by King Features Syndicate. The serial also features Jeanne Bates as the Phantom's girlfriend Diana Palmer, and Ace the Wonder Dog as the Phantom's trusty German shepherd Devil (who is a wolf in the original comic strip).

Professor Davidson (Frank Shannon) plans an expedition to find the Lost City of Zoloz. The location of the city is contained on seven pieces of ivory, three of which Davidson already possesses. Doctor Bremmer (Kenneth MacDonald), however, intends to find the lost city and use it as a secret airbase for his unnamed country. To remove him as an obstacle, he kills The Phantom, only for his recently returned son, Geoffrey Prescott, to inherit the family identity and take over the mantle of The Phantom.

Three of the remaining ivory pieces are owned by Singapore Smith (Joe Devlin), who initially steals Davidson's pieces. The seventh, and most important piece, is missing at first but turns up in the possession of Tartar (which The Phantom acquires by wrestling Tartar's pet gorilla).

Like most serials, The Phantom had a low budget. Most of the serial was filmed in the Hollywood hills, which doubled as the African jungle. For the serial, the Phantom's real name is Geoffrey Prescott. In the comic strip, his real name had not yet been introduced. The Phantom's real name was eventually introduced into the comic strip as Kit Walker. The Phantom tells Singapore Smith to call him "Walker" when he covers his costume with a hat, dark glasses, and an overcoat so he can enter civilization unobtrusively.

The cost of this item is $14.99. This is good quality picture and sound. This DVD comes with artwork, label and case. See provided images above, these images are of the actual items.

This product is NOT a commercially released DVD, it is manufactured on demand using DVD-R recordable media (burned). If your DVD drive or player was made prior to 2001, it may not support DVD-R discs. If disc does not play in your disc player try playing it on your computer. If it plays OK then your player is not compatible with DVD-R discs.

If the disc does not play on your disc player I will refund your purchase price plus $5.00 for your expense to return the items. If you should receive a â€œbadâ€ disc, the defective disc will be replaced.

Free shipping with tracking only within the U.S. These DVDs will only be shipped to U.S. addresses.

Please allow up to 7 days for production and shipping as this item is made on demand not ahead of time.

PLEASE NOTE: We only accept PayPal. So please be aware of this before you buy. If you do not have a PayPal account you can sign-up for free, there is no charge or fee to purchase using PayPal.