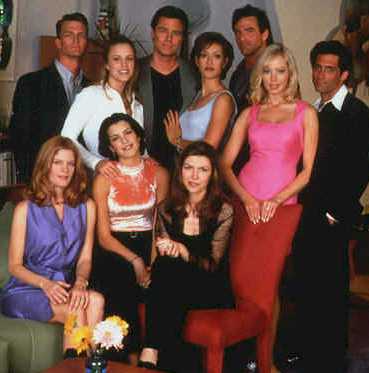 Quality is an honest 8 out of 10 for this RARE Aaron Spelling TV show...Dvds come with Menus..

THIS SHOW HAS NEVER BEEN RELEASED ON RETAIL DVD. THIS SET HAS BEEN RECORDED FROM TV BROADCASTS***

These one-hour episode serial drama's from Aaron Spelling follows the lives of young professionals who have it all, but haven't paid for it yet, on the Southern California fast track to fame, fortune, scandal and ruin. The cast of characters includes Joanna (Michelle Stafford) and Nick Hadley (Jarrod Emick), a young married couple who left their native Midwest for the Pacific Coast where Nick has landed a job as an architect; Joanna's troubled teenage sister Rachel Whittaker (Natalia Cigliuti); Rachel's friends Ashley (Jennifer Banko) & Michael (J. Trevor Edmond) who excel in sneakiness; Robert (Greg Evigan) and Kate (Finola Hughes) Russo, whose sterling life is beginning to tarnish; Jessica Mitchell (Jocelyn Seagrave), a rising professional whose choice of men leads to trouble; Matt Dunning (Lucky Vanous), a construction businessman with a dark side; Laura Sinclair (Kimberley Davies), a real estate agent who does whatever it takes to close a deal; Cory Robbins (Joel Wyner/Dylan Neal), a promising but manipulative plastic surgeon; and beautiful Beth Hooper (Brittney Powell), who rents an apartment from Laura and is being romanced by Cory.

Due to the ease of copying DVD's, all sales are final...I will replace any defective dvd....