Brossard, QC
Member since March 9, 2019
Please only contact the seller if you are interested in buying or bartering for this item. Spam and fraud will not be tolerated.
View seller's other items 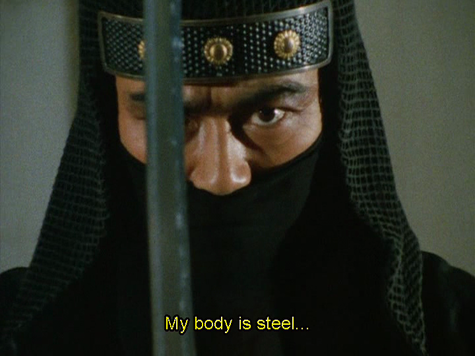 ABOUT THE SERIES: In 1657, during the devastating Edo fire, former Kishu fencing instructor Seigan Marume attempts to kill Iemitsu Tokugawa's widow Lady Takako Honriin. As Lady Honriin's loyal samurai defend her life, she disapears amidst the burning castle. Upon learning that Lady Honriin is still alive, Seigan manages to discover that she's disguised herself as a nun at Senshuan temple. HanzÃ´ Tarao and his band of "Shadow Warriors" confront Seigan and his army of ninja in front of Senshuan temple. Seigan and HanzÃ´ duel to the death. Afterwards, Lady Honriin proposes an alliance between herself and HanzÃ´. Together with his band of "Shadow Warriors" which includes Tezuma no OchÃ´ ("Sleight of Hand" OchÃ´), Abaregoma no Sasuke ("Top-spinner" Sasuke), Toramaro Takebayashi, Biidoro no Inokichi ("Glass" Inokichi), Musasabi no Hayata ("Squirrel" Hayata), Tsumuji no Dairoku ("Whirlwind" Dairoku), Kasumi no KijirÃ´ ("Mist" KijirÃ´), Izayoi no Osuzu ("Moon" Osuzu) and Giyaman no RyÃ»ken ("Diamond" RyÃ»ken), HanzÃ´ Tarao helps the "Nun of Senshuan" to right wrongs in the country. The "Shadow Warriors" also help to protect the the "Lady Nun" from the Lord of Kishu who continues to search for Iemitsu's widow and who is hell bent on removing the current ShÃ´gun (Iemitsu's son and Lady Honriin's adopted son) and replace him with his own son. One day, through a medium, the spirit of the late Shogun Iemitsu is contacted. This leads the Lord of Kishu's supporters to discover the whereabouts of both Lady Takako Honriin and the "Shadow Warriors". The Lord of Kishu then influences the current Shogun to send his Samurai to hunt down the "Shadow Warriors". Pursued by the Shogunate forces, the "Shadow Warriors" are forced into hidding. Seeking vengeance against the evil Lord of Kishu, the "Shadow Warriors" enter the Lord's castle by disguising themselves and accompanying an imperial envoy, and although their quest is costly, their goal is finally achieved.

TITLES OF THE EPISODES:
1. MAN OF TWO FACES
2. KILLER IN THE DARK
3. DEATH IN THE GAY QUARTERS
4. THE SECOND ASSASSINATION
5. THE MAN WITHOUT A SHADOW
6. GLOWING FACES OF NIGHT
7. THE FEMALE SPY FROM THE SOUTH
8. KILLERS IN THE WOMEN'S PRISON
9. DISGUISES AND POISON
10. LULLABY OF DEATH
11. THE MYSTERIOUS SHE-PANTHER
12. TARGET OF EVIL
13. THE SECRET OF THE LADY BOSS
14. SEARCH FOR THE FEMALE PHANTOM
15. THE GIRL WHO FEARED THE DARK
16. THE KILLERS VANISHED THRICE
17. THE GHOST OF THE FULL MOON
18. THE LIVING DEAD
19. DEMON OF VENGEANCE
20. THE HAIKU MURDERS
21. THE HUNTRESS OF MAN
22. THE BABY FROM HELL
23. OSUZU'S LAST BATTLE
24. THE IMPOSTER'S TRAP
25. THE NUN'S CONSPIRACY
26. FAREWELL SHADOW WARRIORS!

NOTICE: This new custom made DVD set comes from a private collection. THERE IS NO ART COVER WITH THIS DVD AND IT IS SOLD IN PLASTIC SLEEVES, NO DVD BOX/CASE. The DVDs surface is white with no artwork/printing/name on it and is of top quality. Should but may not work with Playstations 1/2/3/4 and/or Xbox consoles). Not recommended for Blu-Ray players.

THE PICTURES SHOWN ARE SNAP SHOTS TAKEN FROM THE ACTUAL DVDs, NOT ENHANCED. I give the best possible description of my items. I'll gladly answer any questions you may have. JE PARLE Ã‰GALEMENT LE FRANÃ‡AIS.

All DVDs are guaranteed against defect.

Please note I donâ€™t use Paypal. I use SQUARE (USA/Canadian secured online payment provider) which is as safe as Paypal. Once you buy (when I see the purchase) I send you a Square invoice at your email. You can pay it with most major credit card (no gift card). No need to be a member of SQUARE to pay as it is an online payment provider and itâ€™s free to use. Since I have a Canadian account, all prices will be converted to Canadian funds if the listing is in a currency other than Canadian dollars. You must wait until I email you the SQUARE invoice to make the payment. The price shown on the invoice will always be in Canadian dollars. Other payment options are USPS INTERNATIONAL MONEY ORDER (not the green one) or WESTERN UNION MONEY TRANSFER/CHECK. NO PERSONAL CHECKS.