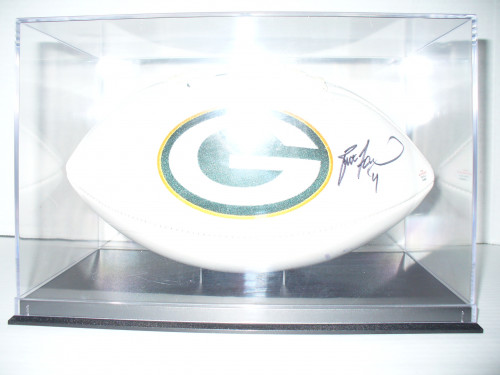 This is a Brett Favre autographed football from my private collection. It is a regulation size football. As you know he
is an American former professional football player who was a quarterback in the National Football League (NFL),
spending the majority of his career with the Green Bay Packers. He was a 20-year veteran of the NFL, having played
quarterback for the Atlanta Falcons in 1991, the Packers from 1992 to 2007, the New York Jets in 2008, and the
Minnesota Vikings from 2009 to 2010. Favre was the first NFL quarterback to pass for 500 touchdowns, throw for
70,000 yards, complete 6,000 passes. I'm asking $150.00 or you can make an offer. Please only serious collectors
need apply. If interested please contact me at southpaw1947 at gmail.com. I accept PayPal or a money order for payment.