Austin, MN
Member since March 22, 2008
Please only contact the seller if you are interested in buying or bartering for this item. Spam and fraud will not be tolerated. 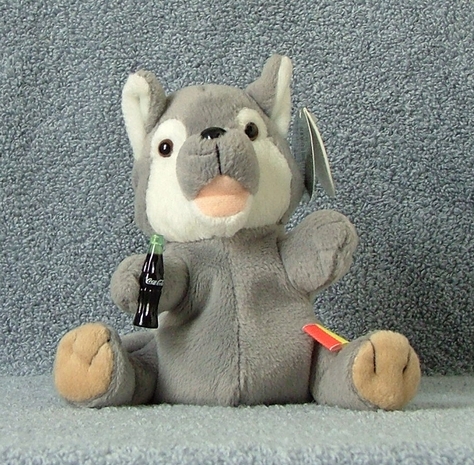 Howls Wolf from Romania - (International Series 4 Retired 1999). This is from the fourth set of Coca Cola International Bean Bags. Howls Wolf has a cloth tag with the countries flag on it attached to it, Romania. Howls Wolf is holding a Tiny Bottle of Coke. The inside of his Holographic hang tag includes the name along with this fact: Howls the Wolf is the ancestor of "mans best friend" and the modern day representative of Romania where citizens were finally able to make Coca-Cola a part of their life in 1989. The Coca Cola Company authorized this special International Coca Cola brand Bean Bag Plush collection honoring the countries of the world in which Coca Cola is sold. The 1999 edition features 50 countries with each one represented by the animal or bird for which the country is famous. Coca Cola retired each set as soon as they were shipped. What a GREAT addition to any Coca Cola, Woodland, Forest, or Wolf Collection. Howls Wolf is in mint condition and will be shipped in a zip lock plastic bag. Price includes shipping and a tracking number.